I always knew it would happen.
Maybe it started way back when I played with my Barbie Star Traveler Motor Home circa 1976, pretending my Barbies were carefree, travelin', trailer-livin' gypsies. Or maybe when I developed a fetish for those shiny shiny (ooooh shiny) silver Airstreams I'd see glinting through the trees here & there in the campgrounds we frequented back in the day. Or maybe even when I spent summers traveling the country living in my grandparents Southwind RV motorhome- which we all officially adored and referred to as Big Mo.
Or maybe it's just my Italian gypsy blood.

But somehow, some way, I always knew I might end up living in a mobile home. And now it looks like that intuition may just become reality- I might be purchasing & moving into a mobile home! 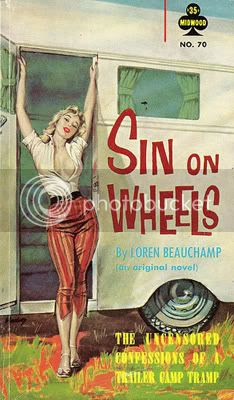 The plans we had been making to convert the garage were besieged with roadblocks and problems- at the rate it was going, it was going to take half a year if not longer to get things going on the construction. An opportunity came up to buy a mobile home, which costs- holy moley- a lot less than a lot of cars cost, I had no idea! So we started thinking about the idea... I don't think I had ever consciously considered it before... but it didn't take long to realize the benefits that could be had by becoming a trailer-livin' woman.

And NO I don't mean the kind of 'benefits' that are suggested on the covers of these crazy old books, goodness gracious! *blush* By the way I dunno what the deuces is up with these books, what the Hell?? I didn't know there was a whole trailer-tramp subgenre of literature out there but there ya go, learn something every day. I thought they were kinda hilarious, and the tag lines are so ridiculously camp, tee hee. 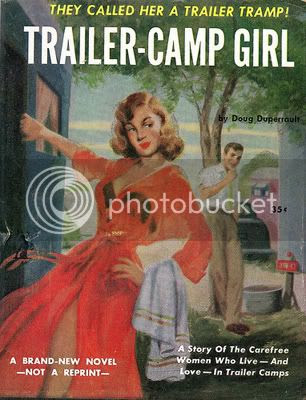 This afternoon I drove to the trailer park (am I being un-PC? Should I be saying 'mobile home community'? Ah screw it *wink*) that I may potentially be moving to... and admittedly I wasn't sure what to expect. The place was pretty nice, though- clean and quiet, with lots of trees lining the winding roads that curve through the park (I totally dig that)... I felt at ease, I felt like I could be comfortable living there.

Visions of crazy-painted gypsy wagons and pink yard flamingos have been floating through my head all day.

I love the idea of having the privacy of my own place... my own place, because yes, I would own it. I love the insanely low price of mobile home living ($240 a month, with some utilities included!) I love that I'd have a yard for my 3 Hellhounds to scamper around in. And maybe this is weird of me, but, I love mobile homes. I have always been fascinated- since I was wee- by homes mobile & motor, the extreme efficiency with which every little centimeter of space is used, the freedom to move the thing if you ever want to, and the allure of a snail-shell home that travels with you. 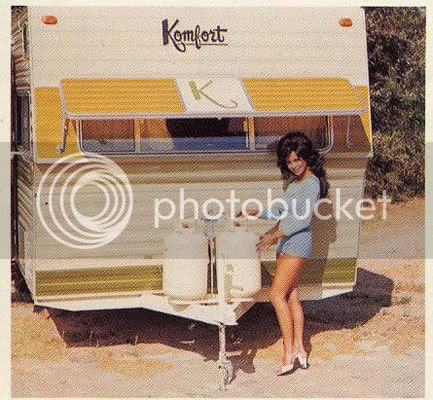 If I do end up going mobile, I'll be posting about my trailer park trials & tribulations here for sure, so stay tuned. And hey, no trailer park jokes from the peanut gallery please! (like I am gonna be able to escape those, groan)
Posted by Shady at 4:29 PM

Hey Shady, people I know that live in trailors (parks) are the happiest people I know. You own the dam thing, can move it if it suits you, and the privacy, and "freedoms" that go with it are a lot better than living in an apartment building (sadly I do) I wish you the best, and hey, I sense the "joy" in your writing..Maybe the Shady we know and love will come back stronger than ever...Good luck Gurl, you deserve it!!!

I live in the biggest mobile home community in the US, 35,000 and counting. Sun Valley, Nevada or little Alabama as I call it. I love the fact that my yard is close to an acre. I find that more valuable than living in the middle of the city. Mine is 3 bedroom and cost 25,000, so I was a happy "camper" (pun intended). Mobile or not it will feel better to own your own place. Best wishes :)

Congrats, girlie!! There is NOTHIN' like havin your own space and stuff (and space for your stuff).
When you take your show on the road, I really hope you'll head up to the Adirondacks for a visit. :)

Ooohhhh you can have a really tiny house (or indeed trailer) warming party. You could invite everyone you know and see how many you can fit in it at once, and then all get drunk and try to figure out how to get everyone out like human jenga. That would be funny.

I am a country music disc jockey, living in a town that constantly smells like poo. Would I DARE make light of trailer livin'? And alienate my public? HELL to the no! :) Congrats, Shades! You NEEEEED YOUR SPACE. I wholeheartedly support youtr decision! But beware...once, log before you...THEY CALLED HER A TRAILER PARK TRAMP! (I'm just a plain old cul-de-sac tramp. *sigh*) ~Randi

Ah, a fellow romantic I see. Shady, you make it sound wonderful. We don't really have the trailer park culture her is Australia. It is more a thing that old people do when they decide to down size and travel across the country, as my Mother in Law has done. I can't wait to hear how it turns out. And I love the novel covers.

I can totally see you living in a vintage airstream with plastic pink flamingoes in the yard. :)

But I think I've been cheated -- we've been living in a motor home in an RV park for the past year or so, and I've never seen any hot chicks living here like the ones on those book covers!

I bought mine in Evansville Indiana for like two grand, and I went back to college. We live out in the county in a small "mobile home park", on a dead end road to a hundred acre haunted wood, love it! Repairs are relatively easy too, if ya can find a guy to do them, lol.

Hey, richardwho, I just stole your dufus prize, for I typed "log before you" and used CAPS FOR EMPHASIS and only now, hours later and a bit drunk, do I see what a douche I made of myself in these here comments. I'm also bad about run-on sentences. ~Randi

i was curious how many stars these books had -- and lo' and behold ... i found this. nifty, eh?