I don't know what happened to swing my luck around, but since the day we (oh-so-luckily) found my mobile home, things have been looking up, and my bad luck has seemed to be slowly turning to the good... 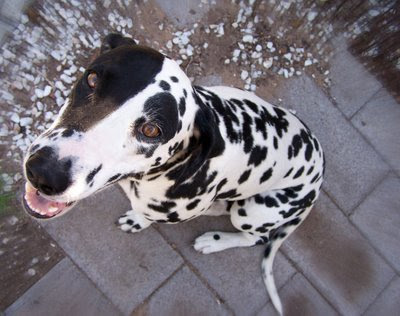 Well, a little over a month ago, someone (no not me, heh) accidentally let Wicca out of the back yard one night, and she took off running like a big, spotted, 4-legged bat out of Hell... and had been missing ever since.

I have been heartsick over it.

I've spent almost every day since then putting up Lost Dog fliers, and calling the shelters, and checking the papers... all to no avail. No sign of Wicca was to be found.

I have been even more stressed over the fact that Wicca has seizures (apparently, it's pretty common with certain full-breds, like Dalmations) and, if you don't know how to care for a seizure-prone dog, they can die. For one thing, you can never leave them unattended on a leash (they can get strangled if they seize while leashed) Also, the seizures are pretty violent, and can go on for over an hour without proper medication being given, and the dog is totally helpless during the seizure... they can even break bones or choke on their tongues. So... the thought of Wicca being out there somewhere, and having the potential to seize and no one to help her, has been TORMENTING me. I haven't been able to get it out of my mind, even though, after a month+ I admit my hopes of ever seeing her again had faded to almost nothing.

And then, just an hour ago, I got a call from my Dad. He had just gotten home (yeah at 2 a.m., he's a musician what do you expect heh)... and he found a note from Animal Control taped to his front door, saying that they have found Wicca, and that they have her at the shelter! We dunno yet how she got to the shelter (did they pick her up on the streets? Did someone turn her in? We don't know), but she was identified at the shelter when they scanned her and found her microchip! And we can pick her up on Monday morning!!

Now, if only dogs could talk. I mean, where the Hell has she been this last month, what adventures has she gotten herself into??! I guess we'll never know!

That's great! Missing pets suck (one of my cats has darted to freedom three times).

.... sister's murder??
is there an entry about this i haven't gone far back enough to read?
this breaks my heart.
i'm happy to hear you found Wicca though.
i was so upset when my snake disappeared for two weeks...and that was just a cold blooded creature...nothing like loosing a dog i'm sure.

i love reading your posts.

Wow! What a terrific turn of events...and what a sweet-faced doggit! Shades, I think The Universe just figured out It was crediting the wrong account with penalties, and has set out to make reparations. :) Go, you! ~Randi

That is the most awesome news I've heard!
Seriously, where has that girl been hiding, or partying with?!?! lol
I am sooooo happy to hear that you can get her back TOMORROW!!!!!
YAY!
Tell us what she says her story is! ;)
Next time, be sure you get a collar with a camera or video camera on it that takes pics/video every two minutes or something!

That is awesome!!!! I'm so happy you had some good news to report :)

Newt... thanks! My cat has also escaped a few times but he's a kitty genius and he comes right back home after his little adventure, heh. I was way more worried about the dog!

Karo'smine... yes, my little sister Haley was murdered last year. I haven't written about it here yet, other than to post a memorial on the anniversary: http://heathershade.blogspot.com/2008/07/haley.html
I have posted about it on my Myspace blog though if you want the whole story. I'm very very happy that they found Wicca, she meant the world to Haley and I want to make sure she's taken care of...

Tara... omg, have you seen that site with the cat Mr. Lee who wears a collar-camera and records his daily adventures? It's AWESOME. Lookit: http://www.mr-lee-catcam.de/

Steffy... thank you! I am still so happy and excited, I love happy endings :D