Victim of the Beast

In the quiet, sprawling acres of Salt Lake City Cemetery there lies a grave, a grave surrounded by mystery.

This is the story of the grave of Lily Gray. 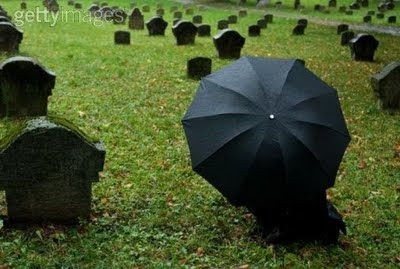 The enigma of this famous grave does not lie with the history of its occupant, as there is no known history to speak of. The details of Lily Gray's life are largely unknown.

Rather, the mystery lies in the dark inscription of the stone. It reads:

This sinister, unexplained inscription has provoked curiosity, and even fear, for generations. So who was Lily Gray? And what is the meaning behind the sinister engraving on her tombstone?

The story of her life shows nothing unusual. According to Ancestry.com, Lily Gray was born on June 4, 1880, in Ontario Canada. The discrepancy in the dates and spelling of her name on her tombstone may be a consequence of the times, when tombstone information was often provided by the recollection of a family member and was not always 100% accurate. Lily Gray was not listed in the Social Security Index; again, this is not unusual for the time period, especially if she never worked a formal job in the States. There are no records of any children being born to her, and her cause of death is listed as natural. All in all, what records there are of Lily Gray indicate nothing beyond a seemingly normal and nondescript life.

So how did this bizarre and fearful message end up on her tombstone? It seems that nobody knows, making it one of Utah's most enduring mysteries.

As with any urban legend, theories abound. The first theory has to do with the infamous 'Highway 666', which traversed through part of Utah... U.S. 666 was famous for it's name- which was changed in 2003 by the American Association of State Highways and Transportation Officials from the devilish 666 to a less sinister-sounding 491. U.S. 666 was also infamous for the exceedingly high rate of fatal accidents along its lonely stretches of road, a fact which over the years it earned it the nickname of the 'Devil's Highway'. It's plausible that Lily Gray may have traveled the treacherous Highway 666 in her time... is it possible that she could have met her fate in an accident on U.S. 666, thus prompting the baffling inscription on her tombstone?

A second theory is more diabolical and sensational in nature... in the first part of the twentieth century, famed Satanist Aleister Crowley spent a significant amount of time in Salt Lake City, building up a devoted following there. Some theorize that Lily Gray somehow became involved in Salt Lake City's Satanic movement, leading to the strange inscription on her tombstone. However, records show that Lily Gray did not move to Salt Lake City until 1950- 3 years after Crowley's death. As interesting as the theory is, there is no proof... which seems to be the case in all that surrounds the Lily Gray mystery.

One last theory lies with Lily Gray's husband, Elmer Gray. Records point to the fact that he had mental problems, that he was a petty criminal who had been incarcerated, and that he may have had anti-government sentiments, as evidenced in this application for criminal pardon. Could his mental unbalance be the key to his wife's cryptic inscription? Was the 'Beast' referenced on Lily's grave the government, or some other enemy in the disturbed mind of Elmer Gray? It bears referencing that Elmer Gray is buried in the same cemetery as his wife, but in a plot far removed her location.

One last clue may remain in this mystery of the grave. Lily Gray's tombstone is etched with a border of evening primrose. According to cemetery symbolism, the meaning of evening primrose on a tombstone can have several meanings... from youth, to memory, to sadness, to hope.

But it is the evening primrose's nickname that proves the most interesting... for its nickname it the 'Devil's lantern'.

We may never know the truth behind the dark and curious inscription on Lily Gray's final resting place. We can only hope that she has found peace in the afterlife, and respite from whatever 'Beast' that plagued her. 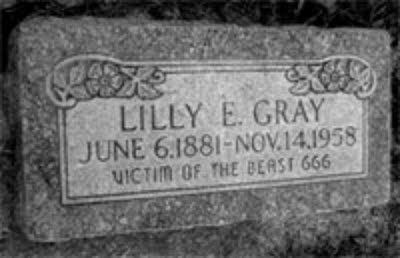 no this story is very creepy i want to know more