The Legend of Sawney Bean 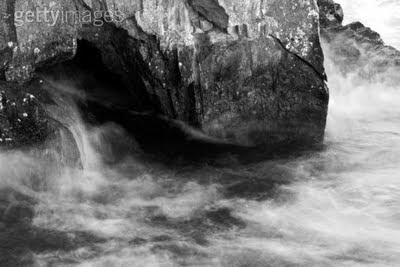 The time: 16th century Scotland. A man and his pretty young wife ride together on a single horse, traveling along a wooded trail on the remote Scottish coastline. The couple has just come from a fair, and are in still in high spirits from the festivities. The moon is beginning to rise, casting a silvery glow onto the wild fern and the flowering heather dotting the edge of the trail. The wife hums softly to herself as seabirds scream in the far distance. She breathes in the sea air and leans her head against her husband's strong shoulder.

Without warning, the quiet of the night is shattered as the trembling of a fir tree bursts into unexplained violence, a disheveled creature darting from the branches into the couple's line of sight.

The wife screams, and suddenly more figures explode from the foliage all around... freakish, disheveled male and female figures like some misplaced prehistoric clan... they are wielding weapons, and in the shadows, there are too many to count. The husband leaps down to the ground, armed with a sword and a pistol and ready to fight. He is trained in combat, and feels he has a reasonably good chance of defending against the bandits. But he does not know what he is up against. The pack attacks with savage ferocity, spooking the horse and overtaking the couple with a single mindedness. Even as his wife tumbles to the ground, the husband fights, dealing blow after blow to what seems like an endless line of brutal assailants. He fights as he hears his wife's terrible screams, and the whoops of the savages as they tear her apart (it is said that the females took her down, slitting her throat and belly, and then feasting on the blood and entrails right before the horrified husband's eyes) Still he fights, even as they gnash their teeth, and countless blows rain down upon him and he crashes to his knees, becoming surer and surer of his own impending death. Just then, the sounds of voices and hoofbeats approach from the bend in the road. A large group of 20-30 fairgoers on their way home suddenly intrudes upon the horrific scene, surprising the attackers, and after a moment's shock they all rush in to help, chasing off the attackers, who seem to melt into the forest without a trace. The husband's life is spared, but his young wife has been horribly mauled to death and is beyond help. The attackers had tried to drag her body away with them but had abandoned it when they had to flee.

It sounds like the plot to some outlandish horror flick. But the fact is, this incident is purported to be real, and it was the beginning of the unraveling of a legend- a real life horror story of madness, incest, mass murder, and cannibalism.... 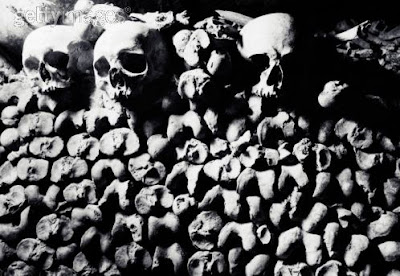 Alexander Bean was born East Lothian, Scotland. He was the son of a hardworking man, a man that trimmed hedges, dug ditches, and worked hard manual labor to provide for his family. The father tried to guide Alexander into the family trade when the time came, but Alexander had different desires. He did not see the need for honest labor, he was lawless and vicious, and he found an equally vicious woman to partner with, a woman that shared his own dark pursuits. He turned his back on his family and left home with her for destinations unknown, and it would be decades before news of them resurfaced, in the most shocking of ways.

Meanwhile, near a place called Galloway (now South Ayrshire), sinister things were occurring. People were disappearing... travelers along the forest roads near the coastline... disappearing without a trace. Every so often, a severed body part would wash up onto the beach, with no further explanation. Fear and paranoia grew, and several major searches of the land were launched, to no avail. The hysteria mounted, leading to false accusations and the lynching of several innocent people. Innkeepers came under close scrutiny, as they were often the last people to see the travelers before they disappeared, and therefore the first targets of the paranoid population. Yet still the baffling disappearances continued unabated.

Then came the bloodthirsty attack on the married couple, in which the husband- the very first victim to ever survive the clan's attacks- was finally able to provide a description of what had taken place. The husband was taken to Glasgow, to recount his terrible, unbelievable experience to the magistrates there. They in turn sent word of the atrocities to King James VI of Scotland, who finally organized a search party of 400 men armed with trained bloodhounds to hunt down the murderous crew, with the husband acting as a guide. The searchers eventually came to a coastal cave in Bannane Head, during which time the bloodhounds went frantic, barking and howling at the cave's entrance. The cave had been considered before, but had been decided to be uninhabitable, as the entrance was completely obscured by water at high tide, rendering it virtually invisible. Now, the stunned searchers discovered that the intricate cave system actually wound almost a mile into the coastline. But that surprise was nothing in comparison for what waited for them inside...

The search party must have felt like they had entered a chamber of Hell when the entered the cave, as they found the arms, legs, thighs, hands and feet of countless men, women and children hanging like beef in a butcher's shop. Pickled human remains were stacked up everywhere, as well as piles of gold and silver, clothing, weapons, cloth, and other assorted spoils from their raids.

The story that was revealed in this awful place was gruesome beyond belief. After 25 years, they had finally found the secret 'home' of Alexander Bean- hence know as 'Sawney Bean'. Along with his wife, Sawney Bean was now the head of a cannibalistic outlaw clan of 48 people- eight sons, six daughters, eighteen grandsons and fourteen granddaughters- all the products of incest and inbreeding and raised for murder and mayhem. The feral family thrived on lawlessness and cannibalism... they would undertake ruthless ambushes under the cover of night, laying in wait to rob and murder individuals or small groups of travelers. They never left a soul alive. The dead bodies of these unfortunate victims were carried back to the family cave, where they were systematically butchered and cannibalized. Leftovers of the corpses were sometimes carefully pickled, stored away as provisions against any times of slim pickings. Extra body parts were tossed into the sea, which eventually swept some of the dismembered parts back onto the beaches and to the horror of the villagers. The searchers found the cave strewn with the butchered remains of humans, and the ghastly evidence of hundreds of acts of cannibalism and murder. Some estimates claim the Sawney Beans took 1000's of victims. 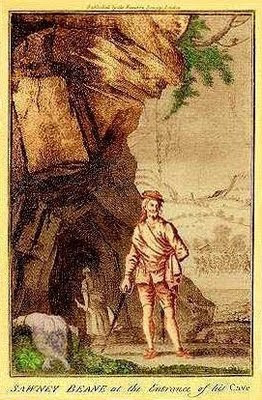 This old drawing depicts Sawney Bean at the head of his cave; a slaughtered person lies on the rocks to the left as a woman in the background carries a severed leg inside


It would seem incredible that such a clan could survive unnoticed for so many years. But the Sawney Beans carefully planned their ambushes at night, in remote areas, never taking more than an individual at a time, or a small group, in a place where wilderness still ruled the land and the Sawney Beans ruled the wilderness. Their ambushes were planned carefully, with enough members in place to surround their victims from all sides, making escape impossible. And they never left anything behind- carting off the bodies and whatever else they could salvage from the brutal attacks. They covered their tracks well, living completely self-sufficiently in a well hidden cave system, no doubt supplementing their diet with the fish and wildlife that were abundant in the area when human prey was scarce. At high tide the ocean crept 200 yards into their underground lair, which itself stretched on for almost a mile. In essence their home of horrors was almost completely hidden from the world. Still, over the years the massive number of unexplained disappearances and the washing up of body parts on the shores already had the community on edge. They had no evidence, however, to point to any culprit or even any crime scenes... so they lived with a sense of dread and fear of the unknown hunters that they knew were out there, somewhere.

But finally, after over 2 decades of murderous mayhem, the king's searchers had uncovered the culprits and the grisly reign of the Sawney Beans was brought to an end with the capture of the family. Records say that they were taken in chains to Tolbooth Jail in Edinburgh, whereafter some were transferred to Glasgow, and some to Leith. Thousands of villagers lined up to witness the spectacle of this monstrous family as they were traveled across the land to their final punishment. At the time cannibalism was considered the equivalent of treason, so the Sawney Bean clan was executed without trial. The men had their hands, feet, and genitalia severed, and were left to bleed to death as the women and children of the family watched. It went no easier on the women and children. They were burned alive in 3 separate fires, after watching the last of the lifeblood drain from their menfolk. It is said that not one of the Sawney Bean family showed any remorse or desire for mercy at the end- instead they remained feral... cursing, spitting, and spewing evil words until their very last breaths.

Some historians debate the existence of the Sawney Beans, yet the tale has become Scottish legend. Some note that the newspapers and publications of the time when the family was active made no mention of the multiple disappearances, and speculate that the later published stories about the case could have been sensationalistic exaggeration. But others note that cannibalism was not uncommon in medieval Scotland, and also, Galloway was also known to be a very wild and lawless place at the time, so it's not unthinkable that crimes such as these could have been committed there. Maybe not on the level of the Sawney Bean story- perhaps there is exaggeration there, as is common in most legends and folktales- but no one can really know for sure.


The story lives on in Scotland's mythology, and has inspired numerous Hollywood adaptations, such as The Hills Have Eyes. It has also inspired books, such as Jack Ketchum's Off Season and it's sequel, Offspring.

Also, a movie based on Offspring was just released on DVD, and it is a really chilling portrayal of a Sawney Bean-like clan bent on a murderous spree:

I learned about Sawyney Bean after reading about Sweeney Todd. Although Sweeney's a work of fiction, he was probably given his first name after Sawney.

Sweeney = Sawney... never even thought about that but you are prolly right Chris!

Glad you guys are liking the creepiness ;)