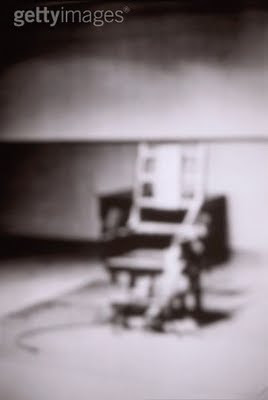 "Hoka hey, it's a good day to die. Thank you very much. I love you all. Goodbye"
Clarence Ray Allen, convicted of three murders in 1982 and executed in California in 2006 at the age of 76


"Somebody needs to kill my attorney."
George Harris, executed in Missouri in 2000 for murder


"Well, gentlemen, you are about to see a baked Appel."
George Appel, executed by electric chair in 1928


"Take a step forward, lads. It will be easier that way."
Erskine Childers, Irish patriot, executed by firing squad November 24, 1922


"You sons of bitches. Give my love to Mother."
Francis "Two Gun" Crowley, executed in electric chair, 1931


"Hurrah for anarchy! This is the happiest moment of my life."
George Engel, last words on the gallows


"How about this for a headline for tomorrow's paper? French fries."
James French, executed in electric chair in Oklahoma, 1966


"I'd like to thank my family for loving me and taking care of me. And the rest of the world can kiss my ass."
Johnny Frank Garrett, Sr., executed by injection, Texas, February 11, 1992


"I did not get my Spaghetti-O's, I got spaghetti. I want the press to know this."
Thomas J. Grasso, executed by injection, Oklahoma, March 20, 1995


"You can be a king or a street sweeper, but everyone dances with the Grim Reaper."
Robert Alton Harris, executed in California's gas chamber, April 21, 1992


"Such is Life."
Ned Kelly, Australian bushranger, executed by hanging 1880
Posted by Shady at 1:28 PM

I will be doing more last words posts in the future, there are tons of interesting ones ;)

Been a long time follower of Lost Destinations...