This past Saturday night, my much-adored dog Dearly died in my arms.

I haven't been able to write about it because I have been heartbroken... well, I am still crushed. But I want to leave a memorial here for my beautiful Dearly-dog. So I'll do my best. Forgive me if I'm still a bit um, overwrought... 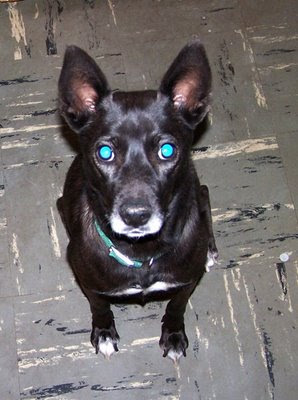 Back in July when Dearly mysteriously went blind overnight, the vet warned me that there might be underlying problems that she couldn't really diagnose or reverse. One possibility for the blindness was a brain tumor or some sort of aneurysm (they can't diagnose those things by x-ray because of the skull, it would take an MRI which costs approx $1500-2000 and can't even be done locally)... and these things, even if they could identify them.... they couldn't have done anything about them. The best (and only) thing we could do was to take Dearly home and to try to keep her happy and help her manage with the blindness, and if she started becoming sick or distressed take her back to the vet. And thus we have been since July... Dearly actually adjusted to her loss of sight quickly, like a champ, and she'd been her sweet lovable self ever since.

Then for a few days last week she didn't seem to want to eat as much as usual. But she was still her regular happy self, seemed ok in every other way, so I got some different dog food (thinking maybe she just didn't like the other) and kept an eye on her... and she actually seemed to feel a little better. Then this past Saturday night she suddenly started acting sick again, and vomited once. After that she became really lethargic, she almost seemed like she was drugged... could barely stand, seemed drowsy. I laid her down on her pillow and her nose and lips were icy-cold. I covered her up in blankets and me and my cousin took turns holding her for awhile... she warmed up a bit but she never regained alertness, she was just limp in our arms, and very quiet.

A few hours later, she was back on her pillow and I was on the floor beside her petting her when she suddenly stood up and staggered onto my lap. I wrapped my arms around her body meaning to hold her when she made a little coughing sound and went limp in my arms. At that exact moment I felt her heart stop beating against my hand, which was cradling her under her chest, she was still standing in my lap but she was... gone. Her head went heavy onto my chest and her breath sighed once and she was gone in my arms. Just like that.

The horrible feeling that opened up in my chest at that moment just won't seem to go away. I know her prognosis wasn't too great 6 months ago but I still for some reason cannot believe she is gone. Ever since I rescued her from a cemetery death-trap years ago, Dearly has been my literal shadow... trailing closely by my side every single time I moved, and I am not exaggerating. So her absence, and the silence when I walk (I can't get used to not hearing that tickticktick of her nails against the floor)... it's just overwhelming me still.

She was really special to me and I hope her spirit is somehow still trailing me even now... because I just can't bear to think she's gone. Goodnight, Dearly-dog... I love you very much mama. I know I'll see you again someday. 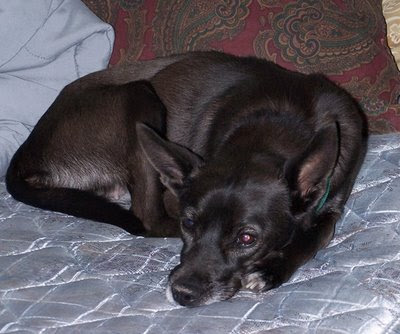 Oh Shady, again tragedy hits you right between the eyes.. Losing such a deer pet is like losing a close family member. You’ve lost both before. Sad, Very sad.. I know that these mere words can’t take away the pain you have right now, and will have for some time. But if you’ve learned anything, you’ve learned that the pain will lesson and become bearable. Time is the only thing that will heal your heart, although it will still leave a scar.

Life for us, and animals, is nothing more than a race, or better explained, a roller coaster ride from the “cradle to the grave“. Ups and downs, slow and fast. He who lasts longest wins the race, he who rides the roller coaster longer, lives best. You saved dearly from a certain death, which gave her tons more fun and excitement in her short life. Don’t think for a minute that she didn’t “shadow” you for a reason. She was showing her gratitude. And when her final moment came, it was your lap she went to. It was to let you know she was leaving and to thank you. Dogs are much smarter than we are..

Dearly would want you to do one thing. Morn for her awhile, then get back on that roller coaster and ride shady ride. When your ride begins to slow down, you’ll have time to reflect on the past before it stops and don’t look at the bad things, look at the love you had, and gave, and the enjoyment you got out of life. The bad parts, well, there is nothing wrong with a slip and fall now and then as long as you learn something from it.. We all make mistakes, that’s part of the ride. You were blessed with many fine pets, and lots of good friends. The rest can kiss your ass..

I feel bad for you now, but I know you’ll bounce back better for the experience of having a “shadow” named Dearly..
Peace My friend
chick

I'm very sorry about your loss.Please try to take solace in the fact that you gave her much love and good care,which obviously she didn't have before you found her.You are a great person for loving animals so much!

Shady,
I clearly remember the day you brought Dearly home. You did so much for her and she did a lot for you too.
The way she died just shows the love and trust between you too.
You are in my thoughts girl. I love you very much.

i really am distraught for you. i have a sweet cat named Nelly (Nelliebelle, The Nell, Snidely, El Gato, Naughty Da Kittums, etc.) and i don't know what i'd do without her. she, too, is my constant shadow and whenever i'm sick she stops what she is doing (usually spying on the neighbors) and lays down with me quietly until i feel better. the healing will begin shortly but it will take awhile and i totally understand that all too well. we love you Shady!

What a tough life for such a little character. From what I've read here, she overcame all those crap places and difficulties in her life and always returned with love. I can see why you are missing her and sad, that was some special love that she chose you to give to you. I wonder what wonderful being she will be reincarnated as. Keep your eyes open! Or eye, in your case, pirate girl...

This so breaks my heart to read. I'm just so sorry for you. I just don't know what to say. My heart hurts for you.

I hadn't heard about Dearly. What a special pup she was. I remember you and I talking about how she might have been reincarnated from some Egyptian time. I'm glad she had that time to share with you, I know what she meant to you and you to her.
Love,
Uncle Bob